I’m not sure how old my house is but when it was built it was erected with no plumbing or vented heating. The walls are lath and plaster. The plaster is the kind that has horse or cow hair in it. I know about the plaster because several years ago a section of my living room ceiling collapsed. A road crew was using the bucket of an excavator to break through the road asphalt in front of my house. With each bang of the bucket on the road I watched part of the ceiling droop. It didn’t fall right away but several days later I heard a big crash and walked into the room to find bare lath and a whole pile of plaster on the ground.  Old houses are like that. Stuff just happens.

I have a lot of questions about my house that will probably never be answered. Like what’s the deal with that room in the basement. I’ll call it a room but it’s sort of not as it isn’t completely excavated.  To clarify my basement has two rooms with concrete floors. The first room has a lath and plaster ceiling but the walls are just poured concrete. The second room is less finished. There is a door in that second room. When opened that door reveals a space which is a sort of room but it’s filled with dirt. There is dirt that is lower by the door opening but piled up higher towards the back wall within a foot of the ceiling. Water pools in the partially dug out area when it’s really damp out. Looking at it I really can’t tell if they were in the process of filling it in or digging it out. The only time I ever open the door is if I find water in the “proper” part of the basement.

I have always had a very active imagination. Since I was a child I’ve seen things. Catching glimpses of objects out of the corner of my eye or from far away I sometimes perceive them to be other than what they really are. I see the huddled figure of a solitary walker that turns out to be a shrub along the rail line. The monkey (I live in Canada) sitting on the deadfall out in the field is just a part of the deadfall. I know that it’s a big log with a broken branch but it still looks like a monkey to me; a real monkey. In the shadows of the alley way for just a second one day I honestly believed I’d seen a crocodile, or something crocodile-like, nestled beside the wall. Intellectually I know these things can not be but part of me still believes that the shapes in the shadows under the trees are cats or people or elephants or trolls. I’m not saying that trolls aren’t people. If there are trolls I’m sure they think of themselves as people. In my house occasionally the shadows form shapes. Like cats, cat-like shapes or, I don’t know, maybe like a baby crawling at my feet; something small though and just a blush of colour or form.  When I dream, I dream in colour. As I fall asleep gold flecks of light coalesce to form the pictures I see behind my closed eyes. It always, all of it, makes for an interesting inner dialogue.

The other night I was using my bandsaw to cut a fairy door for a project I’m working on. My bandsaw sits on top of a workbench which is located in the part of the basement where the mystery door is. It was a particularly windy night which is not unusual where I live. Normally on a very windy (or cold) night I like to snuggle down right in the middle of my bed and take comfort in the space that divides me from the wild elements. But that night I had work to do. A bandsaw is fairly noisy but not so noisy as to block the sound that seemed to come from behind that door. There was a noise from the other side of that door that sounded big, howling big, wild and mad. Granted it was windy outside but I was in the basement so why would the sound of the wind come from behind that door? It’s underground. I suppose I should have opened the door to check it out. It’s just a half dug out or half filled in space. But you know what? I didn’t. In my mind’s eye I already knew there was an enormous twilight zone whirling vortex to hell behind that door so I didn’t really need to open it. My imagination provided more than enough of a story line to send me hurrying back up to my work space. I’m not one to poke the possum. I think it’s better if we all just act like it really is dead.

This project I’ve been crazy busy with the past month is some volunteer work I’m doing for a non-profit group that supports local amateur theatre. I’ve been designing and building a set for their next production. It’s really fun and a great opportunity to try new things while contributing to a community based organization. The space I’ve been doing the majority of the construction work in is an old defunct Mason’s lodge that the municipality rented to the theatre group.  There are peep holes in the doors and a sliding door with a padlock to close off the largest room. The ceiling of that room is arranged in such a way as to indicate the 4 compass points and there is a separate switch connected to a single light bulb located at the centre of those points.

It’s probably not the best place for someone like me to spend a large amount of time alone. I haven’t discovered a small town conspiracy of hidden ritual murder or been dragged into the clutches of the Cult of Cthulhu that is secretly still operating there. I haven’t been sucked into the wormhole that only opens at midnight on a certain night of the year when the stars are in perfect alignment…

The Gorillaz – Clint Eastwood and Gene Wilder with Pure Imagination from Willie Wonka. 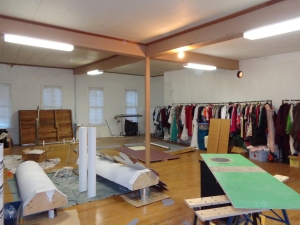