This painting is SO close to being done I can almost taste it. Today was going to be the day. I have the hook on the wall with a place ready for it to sit until it’s time to varnish it. I’ve screwed the tabs into the stretcher and strung the picture wire across the back. There’s just a bit of this to do and a bit of that but still I’m sitting here at 3 am and it just WON’T. COME. TO. AN. END. I really was going to get it done today but when I took the dogs out this morning (I should clarify my morning is your afternoon as I usually go to bed around 5am) I spotted a wee white bunny in my vegetable garden. It was sitting behind the pegged down wire fence, hunched right up against my peas. It could have fit in the palm of my hand. The white of its fur stood out in bright contrast to the garden greenery. It’s not winter here so those who know better might be surprised by the colour of its fur as the hare (not rabbit) native to this area wears a subtle shade of sable and grey in the summer. Several years ago some well-meaning idiot (the emphasis is on idiot) decided to let their domestic rabbits enjoy an outdoor environment. Since then these very cute but extremely destructive furry bundles have taken over the hamlet. They’ve forced out the native species, attracted apex predators like coyotes, and destroyed lawns and gardens. Despite this some people love them and add to the problem by feeding them. Others are not so enthusiastic. One gent down the road was shooting and eating them. He stopped when he discovered a “wormy” one.

With my sweet peas in jeopardy, unhappily it was time to call on my inner Mr. McGregor. 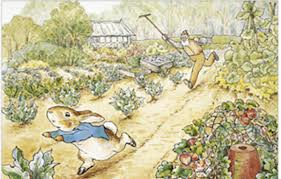 I didn’t scheme to bag up the bunny to trade for tobacco but I may have accidentally trapped him/her in my garden shed. As soon as I saw it, I hustled the dogs into the house as a bunny is just an interesting chew toy to them. Being the grown up full-sized adult that I am, I then went to the wood pile  to get a stick so I wouldn’t have to come too close to the wee little bunny. I’ve seen Monty Python and the Holy Grail so I knew I had to be careful. I was going to try to prod it out of the garden from a very respectable distance with the longest stick (remember it was the size of a new-born kitten) that I could find. I stepped over the fence and moved towards the white bundle of fur with my stick a-a-a-and it bolted. That was a bit of a surprise. Normally rabbits freeze instinctively as predators are attracted to motion. This little guy took off like a flash towards the garden shed that makes up the back wall of my garden enclosure. It headed towards the shed and then right up under the wall. Damn it! So off I went back to the house to get the shed key.

I couldn’t find the bunny inside but to be honest my garden shed is very messy as well as very old. It looks like it might have had lathe and plaster in it at one time. The bunny had squeezed in under some rotting boards at the bottom of the wall. I spent several hours removing board so rotten I could pull it out by hand, replacing it with new wood, and tidying up the shed. I did my best to be as noisy as possible by banging things around exclaiming “Why on earth is this still here?” or alternatively “Why isn’t this in the garbage?” and occasionally cursing as I encountered cardboard boxes full of mouse droppings and curtains of dust clotted cobwebs still very much inhabited by their creators. I made enough noise to scare any passersby so the bunny should have been well on its way. I finished up by making sure the fence was firmly pegged down. I had to close the shed door though as an open shed door is an invitation to other even more problematic visitors like raccoons, possums or skunks.

There’s just something about this painting. I could attribute it to an adverse universe but that’s just an excuse. It should have been done over a month ago but it isn’t and I’m not sure why. I really want it done. So why have I started to write the two plays I’ve been roughing out in my mind for the past couple of months? Why have I completed an abstract painting, started another landscape and prepped saw blades? The bunny came out of nowhere but really the plays, the blades, the abstract, and this blog entry (AND the other two I’ve started but haven’t finished yet) that I’m writing, as I enjoy a gin and tonic and sing along with an old blues CD, don’t need to be done right now. I should probably confess that I’m actually singing quite loudly. The dogs are used to it, the cats don’t care about anything I do unless it has to do with gratifying their needs or desires, and I’ve got the windows closed so the neighbours can’t hear me. I’ve a half-acre on either side between the houses but it is the country and voices carry.  Goodness…now I’ve taken some pictures of my messy work space.

Another confession, there was some arm waving and a brief bit of “chair dancing” as I uploaded the pictures. So-o-o I think it’s going to be one more day (night) for this painting. I hope the bunny got out of the shed. I’ll check when I get up. I’m not really the true Mr. McGregor type.